This summer, my Dad and his friend Avichai decided to ride the Mid Atlantic Backcountry Discovery Route, shortened to MABDR, a route developed by the BDR group, a nonprofit. We were excited to try out this route, as it is one of the few extended trails in the northeast that caters to adventure motorcyclists.

The route is roughly 1,000 miles, and follows back roads and forest trails through Virginia, West Virginia, Maryland, and Pennsylvania. Since Dad and Avichai live in New York, we would ride the trail south to north. 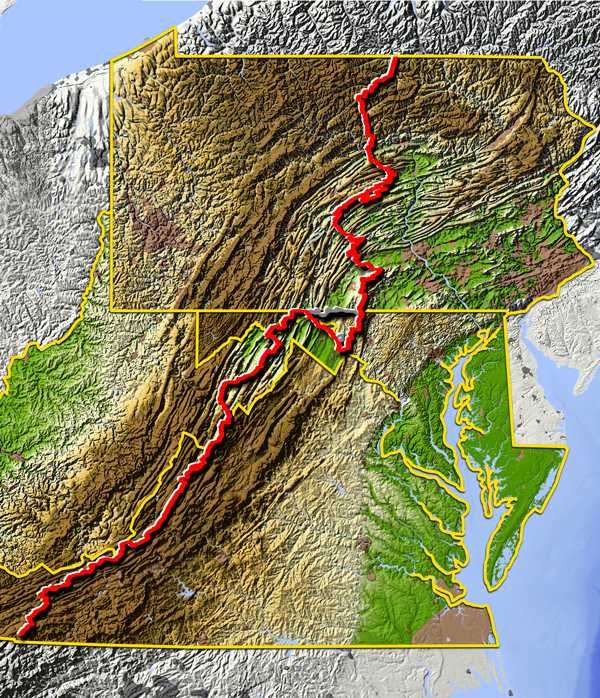 The MABDR is roughly 1,000 miles, composed of back roads and forest trails

For this trip, I kept track of my location with Google Timeline, which keeps track of where you are and allows you to look back on this online. This works reasonably well, but at times the location history lacks enough data points to trace off road routes and just displays a straight line between points. 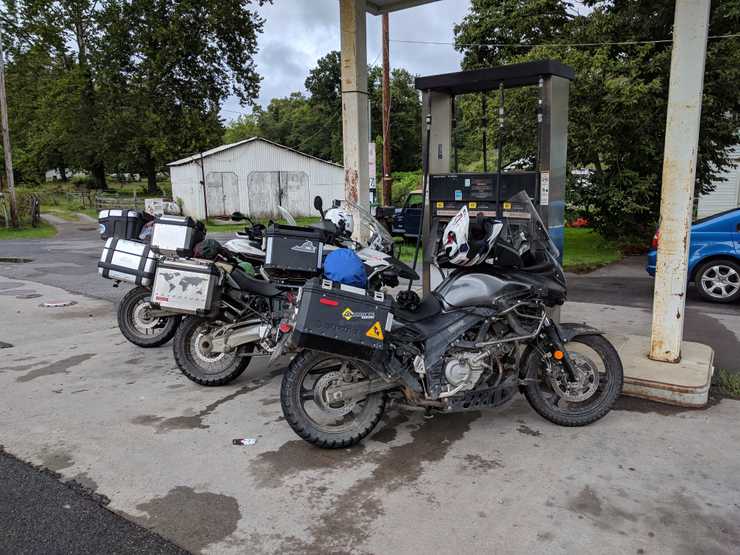 Triumph Tiger, BMW GS 1200 GSA, and Vstrom 650 Adventure are our bikes for this trip

Day 0 - Getting to trail start

This was a short day for me. The three of us would met in Front Royal, which is where the north entrance to the Skyline Drive is. We grabbed some late lunch at a diner and rode a portion of the Skyline Drive. Both Dad and Avichai were a bit spent from their haul from New York, so we decided to pause at Lauray and find a place to sleep.

Definitely would not recommend the Days Inn we stayed at - it was really subpar. 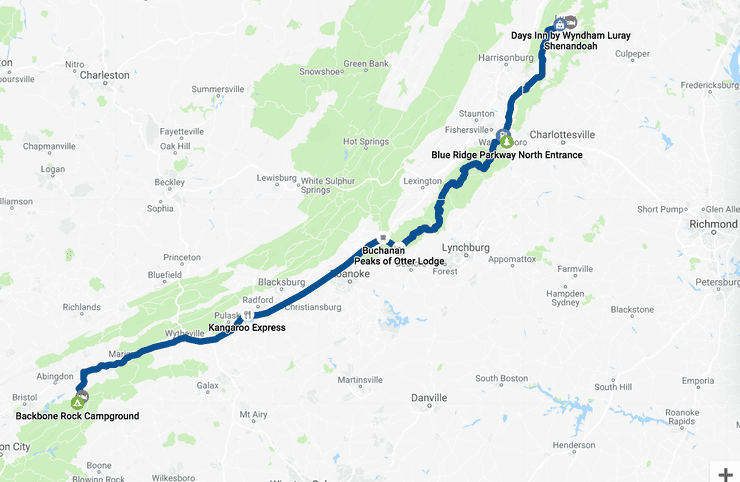 We began the morning with the second half of Skyline Drive. It is a beautiful ride. The weather didn’t really work out in our favor today - it rained on and off the whole time, but on occasion we could glimpse some views through the cloud cover. 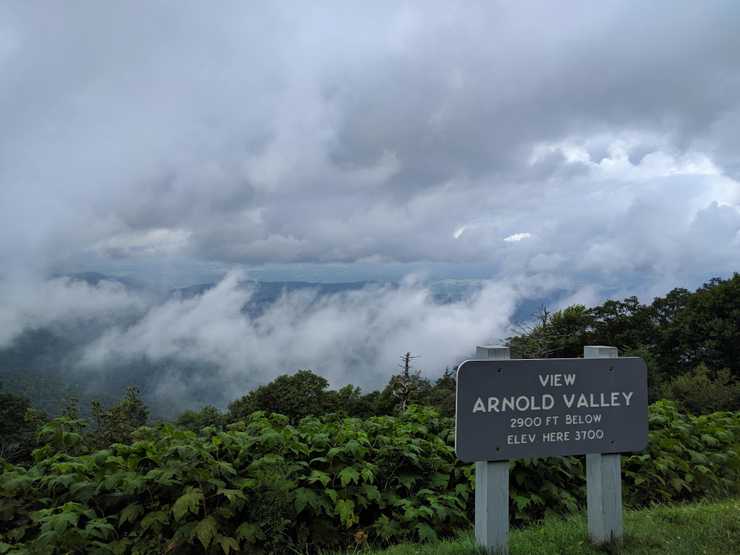 The Skyline Drive is really the first part of the Blue Ridge Parkway, which is a few hundred mile road through the Adirondacks. I think many people don’t realize that the next hundred miles after Skyline Drive are just as beautiful, and it’s free to enter, as opposed to Skyline Drive, which costs about $25 to enter.

Skyline Drive leads into the Blue Ridge Parkway, which we took for about half a day. We stopped at Peaks of Otter Lodge for break, and then took the interstate the rest of the way, as we wanted to start the the actual trail by the next day. Once we arrived in Damascus, our first though was to stay at campsite across the border in Tenessee, but the limited facilities there had us reconsider, and we decided to stay at the Dragonfly Inn, a very nice Bed & Breakfast. The owner made us a wonderful breakfast in his restaurant the next morning. We finished out the day with roughly 280 miles on the odomoter. 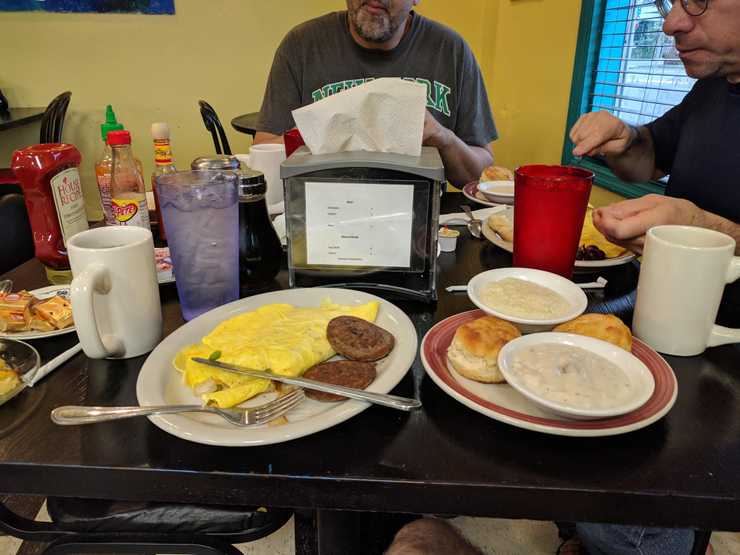 Breakfast at the Dragonfly Inn restaurant 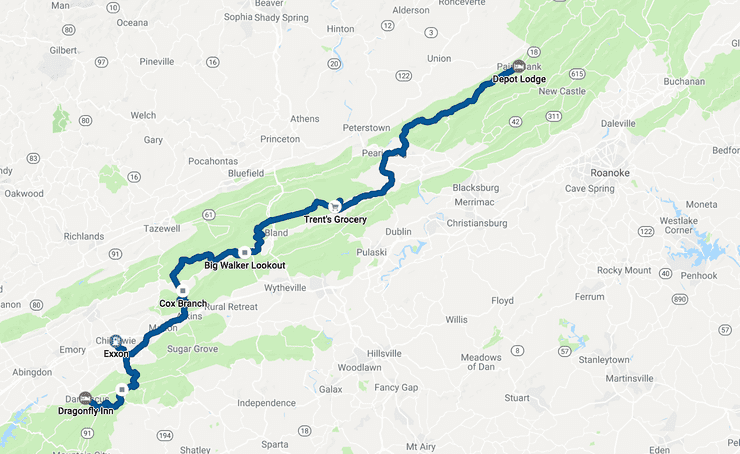 Some photos from today: 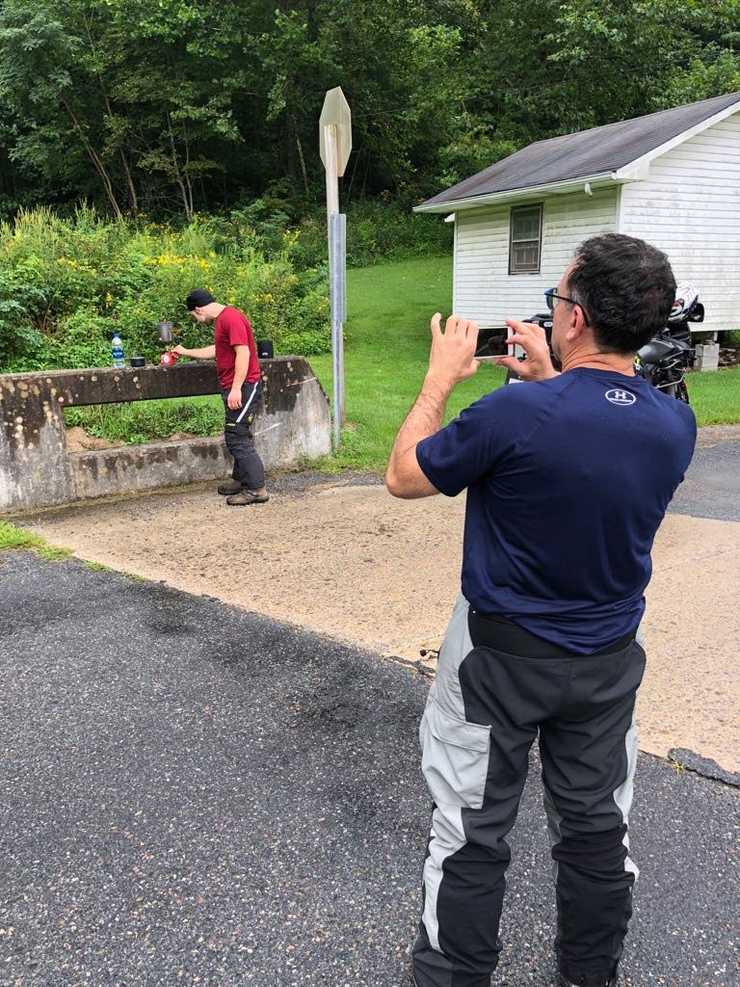 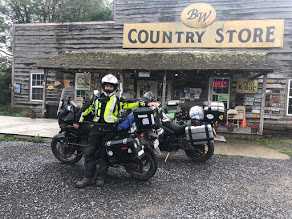 Stopping at the Country Store to wait out some rain

After a long day of riding, it was nice to stop a hotel. The Depot Lodge has an interesting configuration - it has a few bedrooms upstairs, with a nicely decorated common area on the ground floor. It looks like it used to be a train station back in the day. The even had a room in a converted train car!

We met a couple on a Ducati Multistrada on a road trip from Canada to Georgia riding two-up and had a nice time chatting with them for a little while.

Lots of nice off road riding today. The going was slower as the riding in the forest did have some technical sections 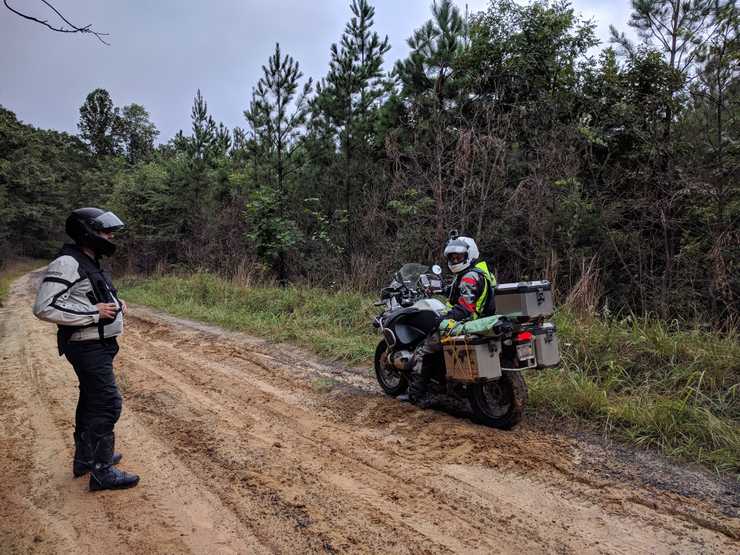 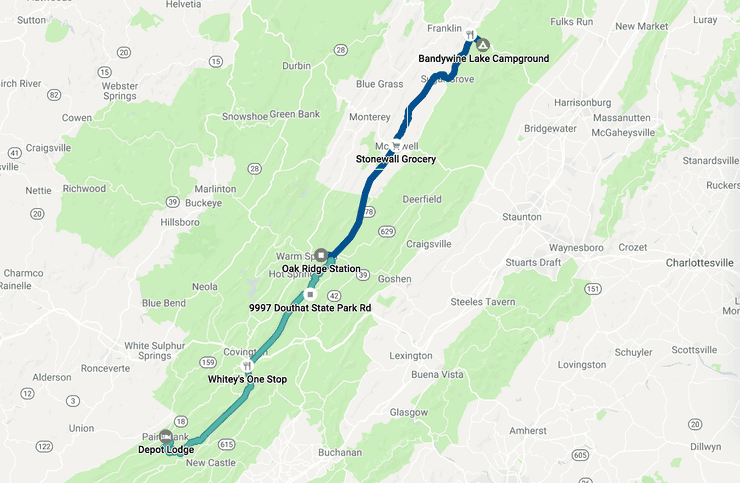 Today we wanted to camp, and it looked like the weather would cooperate, at least for the evening. Rain forecasted for the middle of the night, but we figured we’d just sleep through. We set up camp, showered, and relaxed with some dinner.

However, the rain came much earlier. As we were eating dinner, sitting around a park bench, the wind began to howl and skies turned dark gray. We scrambled to throw everything in our tents, and not a minute too late - it began to pour. A bit of a bummer for Avichai, who had to be in his tent alone, but it was close to night anyway, so we’d just call it for today.

Then our tent began to leak. Turns out that the tent Dad brought from home was not quite up to the task. Dad and my sleeping mattresses began to soak up the water, and we looked at each other and begrudgingly thought about an escape plan to a motel. Avichai’s tent stayed dry, and I’m sure he was disappointed to have to put his riding gear and head to town to look for a place to stay.

It didn’t look like there were many options, so we stopped at the first motel we saw, which happened to be in the back of a pizza shop. 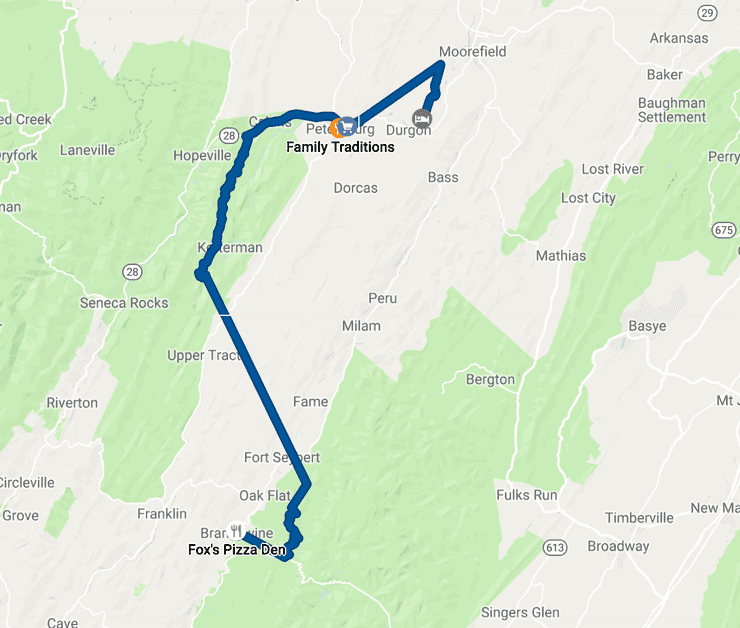 We decided to camp today, as the weather cooperated and was mostly rain-free. We found a guy who rented out his land to RV campers and snagged a riverside campground which made for a great night. 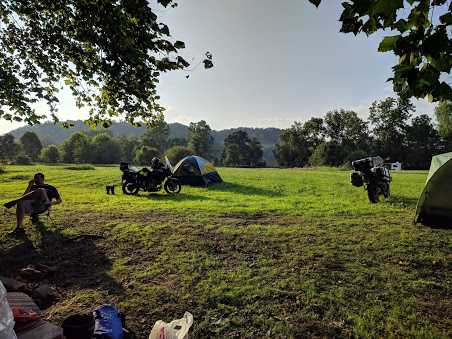 Tents and motorcycles by the river 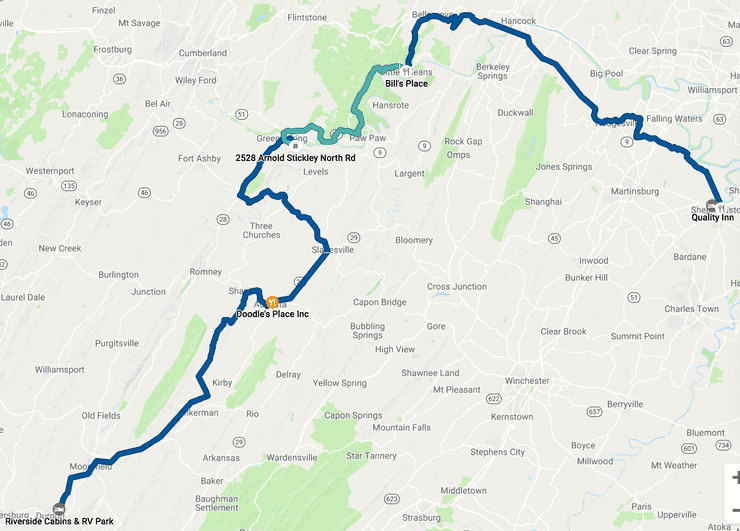 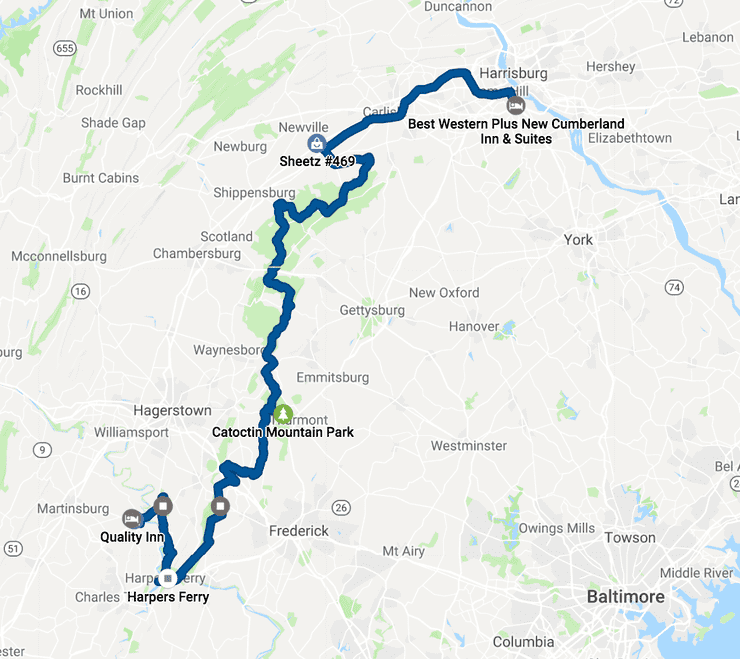 In the morning, we stopped by Antietam Battlefield. A historian gave us a nice lecture in their overlook room, which gives a nice view of the land on which the battle happened.

The route passes through Harper’s Ferry, a nice town that is a popular weekend spot. We had some lunch at a local restaurant and moved on. 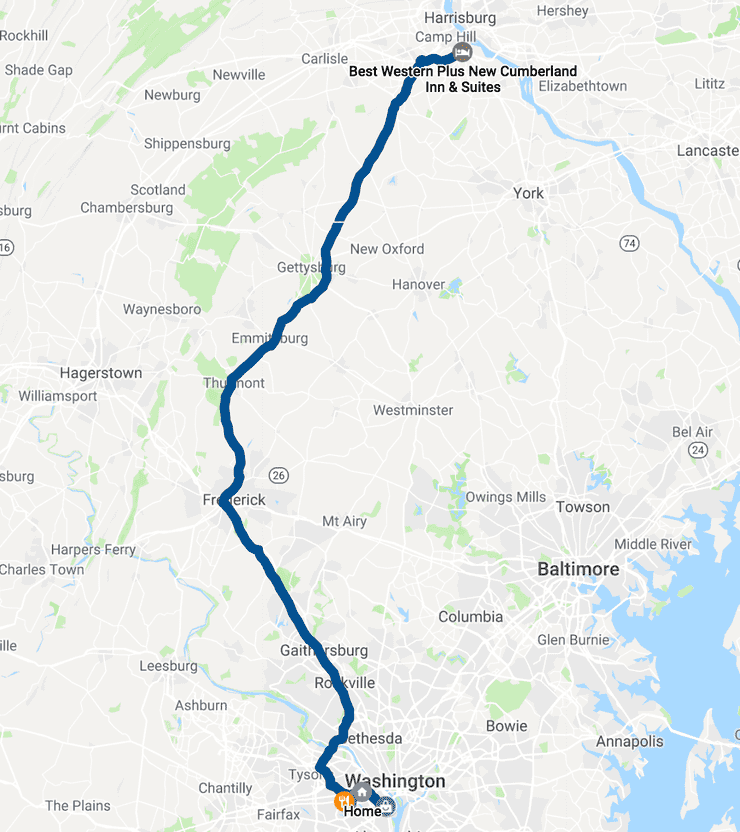 Today was commute home. Dad and Avichai packed up and rode back to New York, while I rode in the opposite direction back to Virginia. 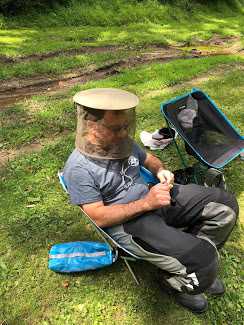 I enjoyed this trip and also learned a few things along the way:

Take a break every few days

The first thing I learned was that riding more than a few days in a row without a break isn’t a good idea. Riding all day is tiring, and if you don’t feel like getting on the bike in the morning, then you probably need a break.

Plan a route for fewer days than your available time

The longer your trip, the more likely it is for something to come. There are a number of things that can delay a trip, such as mechanical issues, fatigue, weather, interesting attractions along the way, etc. We planned on finishing the entire MABDR in six days and this didn’t happen, primarily because we ran out of steam. On paper, the six days were full days of riding (8am-6pm), and that is just hard to sustain for that long.

Stop and do things other than riding

While the primary purpose of our trip was to ride, there were many things along the way that we had to skip over because of time. Although we did end up stopping at Antietam Battle Field, we could have done a lot more. Part of the trip is to enjoy the land that you travel through, and next I will make sure to take things more slowly and leave enough time for non-riding activities such as hiking, museums, etc.

Do short trips before long trips

You learn a lot after travelling for a few days on motorcycles. You learn what gear you brought is useful, and what to leave at home (for example, our leaky tent that just did not stand up to the rain). You learn how to manage time. You learn to plan around the weather. You can apply all of this to your longer trip to make it more successful and enjoyable.

Next up will either be the Trans America Trail or the Continental Divide. This has been a great trip on the bigger bikes, in preparation for something longer and more demanding. Let me know what you guys think in the comments below!